Home/Resources/Who is Jesus in Christianity & Islam? – A Short Paper by S. M. Rizvi

Within the context of the upcoming Christmas holiday, this is a good opportunity to examine the Islamic and Christian views on the holy personality of Jesus, and review the similarities and differences between the two faiths.

Looking at the three Abrahamic faiths, there are two main opposing views regarding the status of Jesus:

Islam proposes a third view, which can be viewed as the common ground between the Abrahamic faiths, by placing Jesus in his rightful place within the spiritual hierarchy. Islam’s view is comprised of 3 important points:

A noteworthy point you may notice is missing from this list is that he is neither labelled as God nor the Son of God. Why that is can be explained in the following sections.

The Status of God in the Abrahamic Faiths

Among the three Abrahamic faiths, we see that monotheism is clearly expressed in Judaism as well as Islam.

At the beginning of the Ten Commandments, God says:

“I am the Lord, your God, who has brought you out of the land of Egypt, out of the house of bondage. You shall have no other gods before me; you shall not make unto thee any graven image or any likeness of any thing that is in heaven above, or that is in the earth beneath, or that is in the water under the earth. You shall not bow down yourself to them, nor serve them; for I the Lord, your God, am a jealous God…” (Exodus 20:1-5)

The corner-stone of Islam is also monotheism:

Aside from these two Abrahamic faiths, we also have Christianity, which separately believes that Jesus is God incarnate and the Son of God, in the real sense of the word.

As Muslims, we believe that all these religions came from the same source and origin — Almighty God. God sent many prophets and messengers to guide humankind. Starting with Adam, the first human being, and ending with Muhammad, the Prophet of Islam. Of the 124,000 prophets who walked the Earth, five of them are given the highest rank in the spiritual hierarchy:

“We made a covenant with the prophets: with you, with Noah, Abraham, Moses and Jesus son of Mary…” (Qur’an 33:7)

However, this raises a question, how can the same God who sent Moses, Jesus, and Muhammad down as his representatives, convey different messages on the most fundamental beliefs in these three religions? How can God, who insists on monotheism in the Bible (in the Old Testament) and the Qur’an, also promote the concept of the Trinity and polytheism?

Son of God: Metaphorical or Literal?

Studying the term “Son of God” is an area that can have the potential for Muslims and Christians to consider it as a common ground between the two faiths.

There is a stark difference in understanding this term between the two faiths. Christianity views Jesus as the literal Son of God, while Islam and even Judaism separate God from His creations.

A Hebrew prophet once quoted God as saying:

And similarly explained in Muslim scripture, the Qur’an states:

If the term “Son of God” is used metaphorically regarding Jesus, meaning that he is very close to God, then the Muslim and Christian faith would immediately find common ground, creating closeness between the two peoples. How can it be considered a metaphorical term? Read on to find out.

Jesus was born in a Jewish family, within the Jewish faith and culture. Therefore, his words must be analyzed in the appropriate historical and cultural context.

The usage of terms such as ‘son’ and ‘father’ in the Jewish faith and culture is also crucial to our accurate understanding of what Jesus meant when he used these terms.

There are many examples in the Jewish Bible where the terms ‘son’ and ‘father’ have been used in a metaphorical sense. Some of these include:

It is in this cultural and linguistic context that we should try to understand the term “Son of God” for Jesus, and the term “Father” for God. As Hans Kung, the famous Catholic philosopher, comments:

“Originally therefore the title of ‘Son of God’ had nothing to do with Jesus’ origin but with his legal and authoritative status. It is a question of function, not of nature. Originally the title did not mean a corporeal sonship…‘Son of God’ therefore did not designate Jesus any more than the king of Israel as a superhuman, divine being, but as the appointed ruler.” (Hans Kung, On Being a Christian [Garden City, NY: Doubleday, 1976] p. 390)

In the Words of Jesus Himself

In addition to the above sections, it would be fitting to examine how Jesus described himself. Looking at the New Testament, he does not exclusively use the term “Son of God.”

When a particular scribe approached him and said, “Master, I will follow you wherever you go.” Jesus replied, “The foxes have holes, and the birds of the air have nests, but the Son of man hath not where he lay his head.” (Matthew 8:20)

When talking to his disciples, Jesus began to teach them that “The Son of man must suffer many things…” (Mark 8:31)

Once more, addressing the twelve disciples, Jesus says, “Behold, we go up to Jerusalem; and the Son of man shall be delivered unto the chief priests…” (Mark 10:33)

The plural term “Sons of God” has been used metaphorically in many places in the Bible. This is different from the singular “Son of God” that is most referred to in the Christian context.

One example is when the Gospel of John, referring to those who accept God’s message, says:

“But as many received him, to them gave he power to become the sons of God, even to them that believe on his name…” (John 1:12)

Another example states that those who are led by the Spirit of God, “they are the sons of God.” (Romans 8:14)

The Islamic perspective of the Almighty is such that God cannot be defined in any material or human dimension; He is the Creator and cannot be envisioned as a created being. And, therefore, Muslims do not believe Jesus was the Son of God. The Qur’ãn says that Jesus himself never claimed to be God’s son:

This statement is also collaborated by the New Testament. Speaking to Mary Magdalene, Jesus says:

In the above statement, Jesus describes God as his father as well as the father of others, clearly indicating the metaphorical nature of this term, in the context of his usage. Jesus again says:

Jesus has also said unto them:

“If God were your Father, you would love me: for I proceeded forth and came from God; neither came I of myself, but he sent me.” (John 8:42)

From the Islamic perspective, the fact of Jesus’ miraculous birth does not automatically mean that he is the “son of God.” In the 9th year of the Islamic era, a Christian delegate came to meet the Prophet Muhammad. They asked him about his opinion of Jesus. The Prophet replied that Jesus was an important prophet and a messenger, that’s all. The Christian delegation then asked how the Prophet explains the miraculous birth of Jesus. The Prophet used the argument that was revealed unto him by God, and that is narrated in the Qur’ãn:

Muslims and Christians agree that the mission of Jesus was to reform the Israelites, and that his enemies eventually conspired to kill him. However, what happened after that? The religion of Christianity states that he was crucified, died on the cross, then rose back to life to ascend to God. Meanwhile, the religion of Islam states that “They did not kill him nor did they crucify him, but it only appeared to them so…They surely did not kill him; rather God raised him unto Himself.” (4:157-158)

This raises the following eschatological questions: Why did God raise Jesus unto Himself? What’s the role of Jesus in the future of humankind?

It is interesting to note that Muslims and Christians share the expectation of the return of Jesus. To understand the reason why God has preserved Jesus for such a long period, I would like to share the statement of my late father when he said that we must go back to the list of the five great prophets of God mentioned earlier: Noah, Abraham, Moses, Jesus, and Muhammad.

God chose Abraham as an important messenger and selected His future representatives from among the descendants of Abraham. Abraham had two sons: Ishmael and Isaac.

From the descendants of Isaac, we have a long list of prophets among the Israelites. The most famous among them are Moses and Jesus. Jesus is also the last representative of God from the line of Isaac, the son of Abraham.

From the descendants of Ishmael, we find Muhammad, the last prophet and messenger of God. And from his descendants, we have the Mahdi, the last representative of God on this Earth. The Mahdi is the Twelfth Imam and successor to the Prophet. He is currently in Occultation, and has also been preserved by God, eventually to appear before the end of this world.

God, in His wise plan, has decided to preserve the last of His representatives from both lines of Abraham’s family: Jesus and Mahdi. And he will bring them together in the future. According to well-known canonical sayings of the Prophet Muhammad, Jesus will return to the earth before the end of this world to assist the Mahdi, the Muslim Messiah, in establishing the Kingdom of God on this earth. That will be the dawn of true peace on Earth. 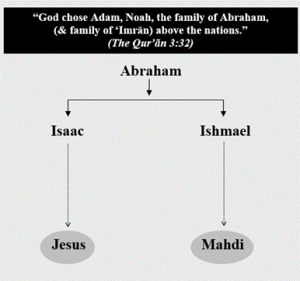 As we’ve seen throughout this paper, the Islamic faith is closer to Christianity than is portrayed in the media today. Especially when we look at the miraculous birth of Jesus, and his destined return in the future.

If the terms used by Christians regarded Jesus being the Son of God are taken in a metaphorical and symbolic sense, then the chain of continuity of monotheism would be re-established, from Judaism all the way to Islam. In the words of the Qur’an:

“Say: O People of the Book! Come to a common word between us and you: We should neither worship anything or anyone but Allah, nor associate anything or anyone with Him, and some of us should not take others for lords besides God.” (Qur’an 3:63)

With this optimistic view of the future, we pray that God hastens the special day when peace and harmony prevail on a global level.

“Jesus as the Son or Servant, of God?”

“The Universal Message of Jesus and Hussain” 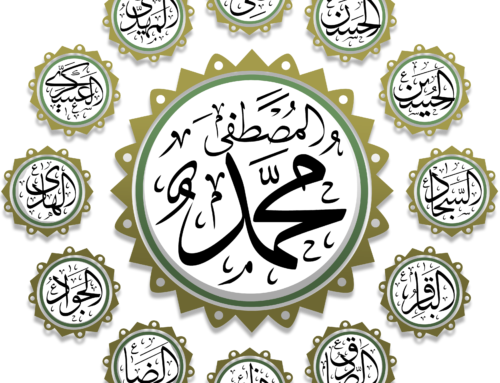 The Ḥadīth of “Whoever dies without an Imam…man māta…” Gallery 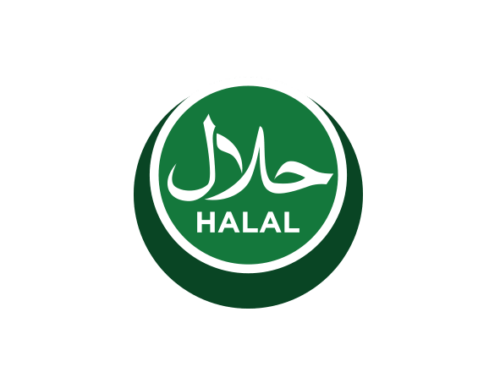 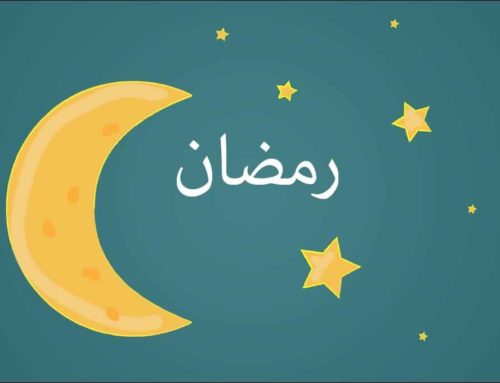 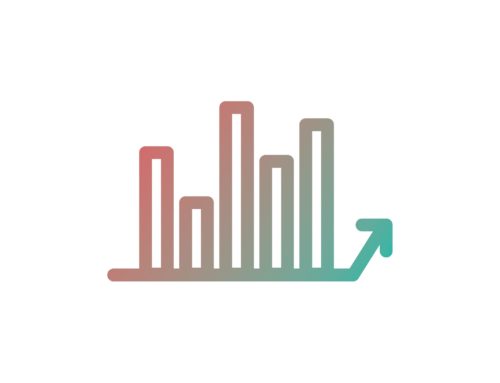