In Memory of A Beloved Friend,
Agha-e Muhammad Taqi Ansāriyān

It was with a heavy heart that I received the sad news of the demise of my beloved friend, al-Ḥaj Muḥammad Taqī Anṣāriyān, who passed away on 17th August 2022 and will be buried today in the shrine of the Blessed Lady Ma‘ṣūma (a) in Qum. May Almighty Allāh shower His blessings on him, accept his good deeds and place him among those who truly strived to convey the message of the Ahlul Bayt (a) around the world.

Agha-e Anṣāriyān was known in the Shī‘a world as a major publisher of Shī‘a literature around the globe, producing a variety of books in different languages through his organization “Anṣāriyān Publications.” His simple bookshop, only a couple streets away from the shrine of Lady Ma‘ṣūma (a), is a go-to destination for international students and visitors of the shrine in Qum. Agha-e Anṣāriyān’s pleasant and humble personality also made his bookstore a place of gathering for various senior scholars of Qum.

During my visits to his shop, I would always see one or another senior scholar walking in for a casual conversation and a cup of tea. He loved the ulama, and even authored some books on the prominent scholars of our time. Just a month ago when we spoke on the phone, he mentioned he is gathering information to write about the recently deceased Dr. Damaghani, and asked me to contribute some writings about him.

Our friendship and brotherly ties go back 50 years, when I arrived in Qum in 1972. Those days he had an administrative position at Darut Tabligh, taking care of the international students. A man of integrity and character, he was trusted by all senior scholars and marāji‘. No wonder various reports of his demise describe him as mu‘tamadu ’l-marāji‘, one who was trusted by the marāji‘. During those days he also assisted his father in his bookshop in Ghuzar-e Khan, near the shrine.

Later, he took over his father’s bookshop, and expanded the publication works. During this era, literature production was a manual process of labour. I remember some days when I, along with the late Hujjatul Islam Maulana Shamim-us-Sibtain and his sons, would gather at Anṣāriyān’s home, creating master copies by cutting and pasting Arabic script of the Qur’ān alongside the English translation by Shakir Ali. Years later, he started “Ansariyan Publications”, focusing on foreign languages. He has left a lasting mark on the distribution of Shi‘a literature worldwide.

My mind goes back to the second year that I was in Qum. Agha-e Anṣāriyān would visit early in the morning, and we would go for walks, during which he wanted me to speak to him in English, aiming to learn the language gradually. During one of these walks on a summer morning, he was wearing rubber sandals. I commented, “Why are you not wearing your shoes?” He looked at me and said something very profound: “Our appearance does not really matter; our inner dimension counts.” He ended with a statement: “mullah shudan āsān, insān shudan mushkil – becoming a cleric is easy, becoming a human being is difficult.” He was indeed a human being par excellence.

On behalf of myself and my family, I extend our deepest condolences to the respected family of Agha-e Anṣāriyān, especially to his younger son HI Agha Muḥammad Ḥusayn. May Allāh elevate the departed soul’s status and give his family the strength to bear the loss. 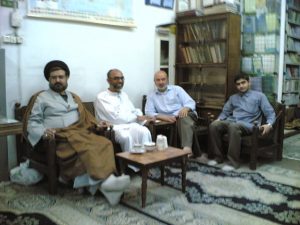 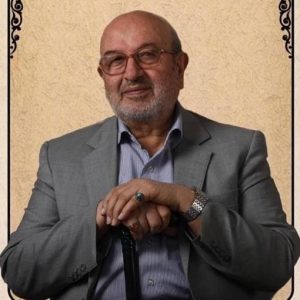